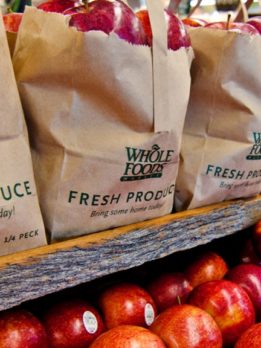 The year 2017 finished on a high note for the US distribution: consumers sentiment remains upbeat and the historically low unemployment rate drove end-of-year sales by almost 5% compared to 2016. A record since 2011.

However, grocers are entering a turbulent zone in 2018. Adapting to changing consumer habits and aggressive competition is becoming increasingly difficult, especially for intermediary actors (Safeway, Publix, etc.) who have not yet found a clear and differential response.

A polarization of the retail trade

Among premium brands, the Amazon-Whole Foods merger may have massive repercussions, such as:

Among discounters, 2018 will be marked by the massive development of Aldi which already aligns more than 1600 stores in the United States and plans to open another 900, but also by continuing the controlled development of Trader Joe’s and by the arrival on the market of Lidl. So many projects that should divert some of the traffic from “intermediate distributors”.

At the announcement of the Amazon-Whole Foods merger and its likely consequences, US food retailers immediately react by lowering prices. However, this decline, pushed by discounts, has been widespread and indiscriminating, and national brand suppliers have paid the price since all distributors, including mass merchandisers like Target demanded reductions of around 10%. This trend, if it continues, will force manufacturers to reduce their investments on important levers for the grocers themselves: demand generation tools and innovation.

This kind of reaction is more of a panic than a strategy and is indicative of the growing gap between the leading distributors in their segments, who have a strong, differentiating and innovative offering and the “middlemen businesses” who are undergoing the changes.

Long-term survival conditions: an acceleration of transformation on 4 major axes

Axis 1: Accelerate the innovation of the product offer

Product innovation will request a close collaboration with suppliers, as well as an ease in the conditions, often uncompromising, on rotations and deadlines for dereferencing. The most advanced distributors have already taken the step to make more room for organic products, all-natural, “free-from” (eg gluten-free, preservative-free, etc.) and local, which also helps to positively change their image.

This innovation will also have to go through the development of an offer to curb prepared meals (meal kits) produced by Blue Apron, Hello Fresh, Munchery and Gobble, which tend to reduce the number of visits to the supermarket. This can be done organically or by start-up acquisitions as did Albertsons by acquiring Plated.

While some distributors have been able to differentiate themselves by their customer experience (Trader Joe’s, Wegmans, Harris Teeter), most will have to accelerate efforts to retain visitors. They will have to integrate more digital innovations, create complementary service offerings, set up on-site catering options, improve merchandising and more aggressively test store pick-up.

Cited as one of two major reasons behind Amazon’s takeover of Whole Foods, the exploitation of customer data will encourage retailers to personalize promotions and put forward cross-selling and upselling offers to improve discount effectiveness and increase the average basket. Keys to success will rely on how the “intermediate distributors” quickly extract and exploit the treasures of their loyalty program data and on when and where they will reach customers (for example, when they pass by the targeted products in the store).

Unlike France, where the sector is relatively concentrated and stable, food distribution in the United States is still very fragmented and sales areas are facing a clear overcapacity. The survival of the “intermediate distributors” will therefore require strong actions of an operational nature (cost reduction by other means than the generalized pressure on suppliers, for example inventory control) but above all strategic (by attaining a regional critical size using M&A).

Pressured by the increased attractiveness of premium offer and the operational and commercial efficiency of discount, the “intermediate distributors” face many challenges. Turning these challenges into opportunities will be key to their survival and development.

This article was originally published on request of LSA magazine on January 24th, 2018 (in French). Daniel Dannenberg and Nicolas Weissberg, Partner and Associate Partner of Emerton in the US, describe the four dimensions on which retailers must excel to survive an increasingly competitive world.