After Concorde, who will manage to revive civilian supersonic aviation?

Commercial aircraft are flying at the same speed as 60 years ago. Since Concorde, which made possible to fly from Paris to New York in only 3h30, no civilian airplane has broken the sound barrier

The loudness of the sonic boom was a major technological lock to Concorde success, but 50 years after its first flight, an on-going project led by NASA is about to make supersonic flights over land possible. If successful, it will significantly increase the number of supersonic routes and increase the supersonic aircraft market size substantially. This technological improvement combined with R&D efforts on operational costs and a much larger addressable market than when Concorde flew may revive civilian supersonic aviation in the coming years.

Who are the new players at the forefront and the early movers? What are the current investments in this field? What are the key success drivers and remaining technological and regulatory locks to revive supersonic aviation?

1. Aircraft are flying at the same speed as 60 years ago and since Concorde was retired in 2003, there has been no civilian supersonic aircraft in service

Commercial aircraft are typically flying between 800 km/h and 900 km/h, which is between 75% and 85% of the speed of sound

First commercial aircraft with jet engines were introduced in the 1950s and their speed were already very close to current typical cruise speed. Civilian aircraft speed has not increased since the end of 1950s, except with supersonic aircraft. 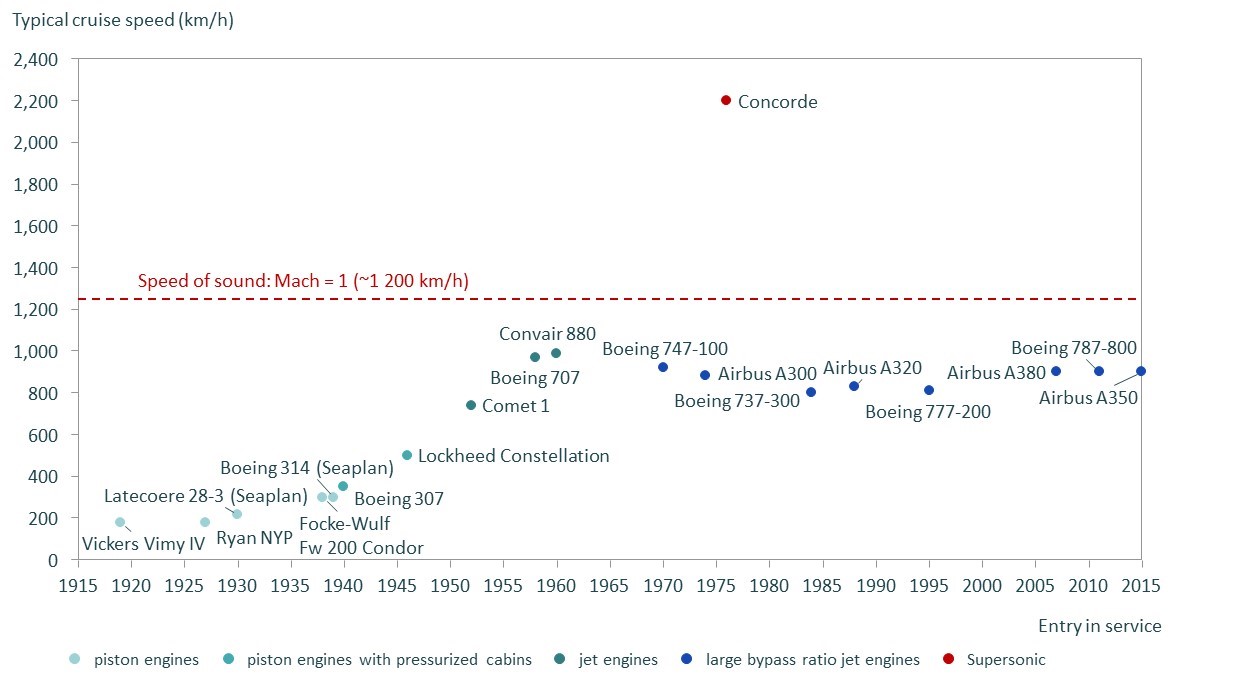 Concorde was in service between 1976 and 2003: it was the most famous commercial supersonic aircraft

Aside from Concorde, Tupolev Tu-144 was the only other civilian supersonic aircraft, but commercial passenger flights stopped after less than 1 year of operation.

Concorde was developed in the 1960s by a French and UK consortium and entered into service in 1976. It flew at twice the speed of sound (Mach 2, ~2 200 km/h), which made it possible to fly from Paris to New York in only 3h30 (compared to about 8h20 with current aircraft).

Concorde did not reach commercial success: due to large operating costs (escalated by the 1970s oil crisis), only 2 airlines (Air France and British Airways) operated a total of 14 aircraft, between 1976 and 2003, almost exclusively on 2 routes: London-New York and Paris-New York. Indeed, Concorde were not allowed to fly supersonic over land due to the noise caused by the sonic boom.

This loudness of the sonic boom was one of the main technological locks to Concorde success. Reducing that noise and allowing supersonic flight over land will significantly increase the number of supersonic routes and increase the market size substantially. It is in this direction that NASA is conducting the Low-Boom Flight Demonstration mission.

Within this context, several supersonic aircraft projects have been launched.

2. Several concrete supersonic aircraft projects have been launched over the past few years. Still, we are at the early stage of supersonic aviation revival

3 segments of projects are currently under development: 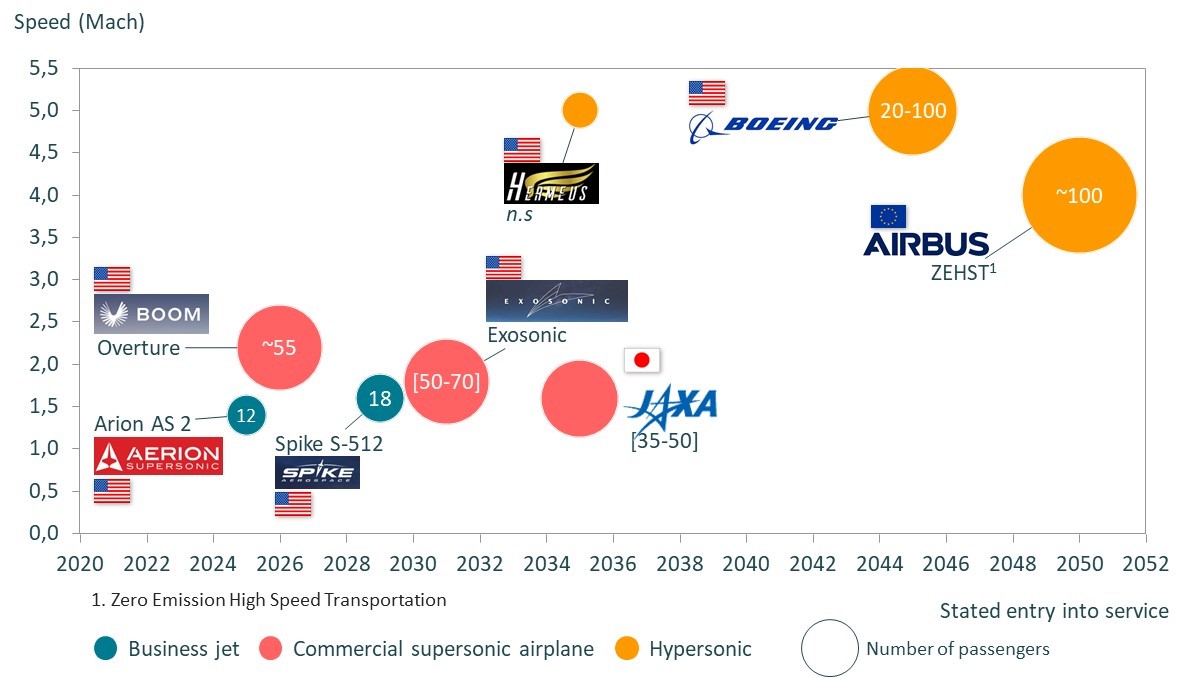 Historical aircraft and equipment manufacturers (OAMs and OEMs) have announced much longer-term projects, but remain active on this R&D segment through industrial partnerships: 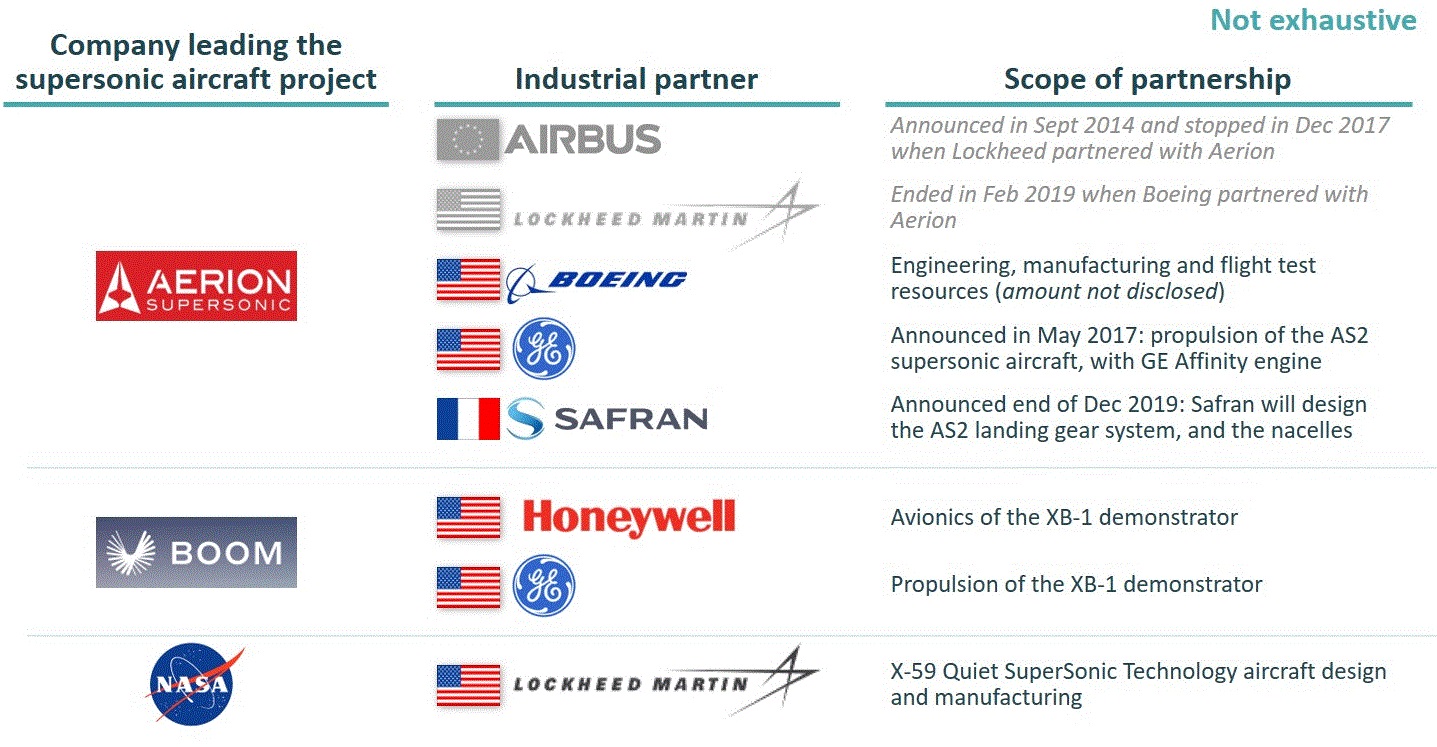 While funding is growing, we are still at the early stage of supersonic technology development. Current players are at the demonstration phase of their program, necessary to trigger the investments needed: Aerion AS2 future aircraft is assessed to cost ~$4B to develop and the start-up Exosonic presented a development plan which costs ~$6B. 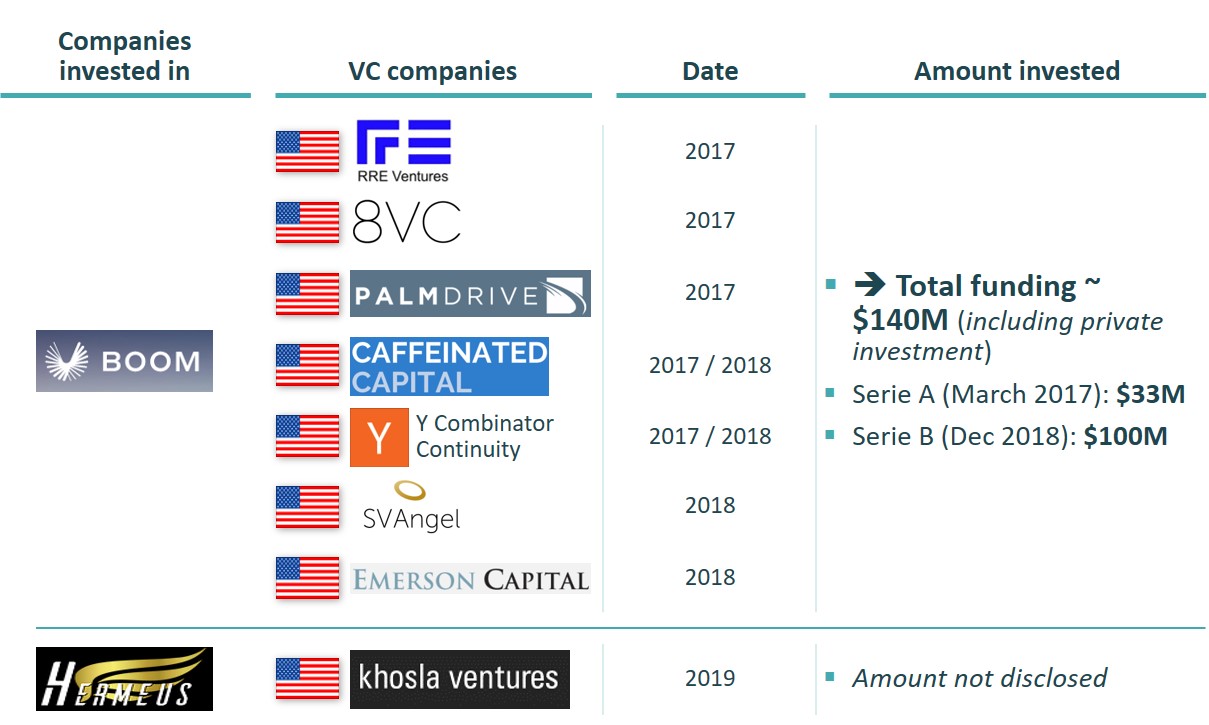 On the commercial aircraft segment, 2 identified airlines (Japan Airlines and Virgin) have placed orders with Boom, which plans to start delivering the aircraft by mid-2020s.

On the business jets segment, Flexjet (a US business jet service provider) placed orders for 20 Aerion AS2, for which the delivery has been announced for 2025.

Thanks to this type of innovative exposure, these early clients should benefit from a large marketing effect. In addition, by cutting flight time in half commercial airliners can offer a new dimension to differentiate themselves from competitors: speed. Such a differentiation factor could have a huge impact in a market where there are limited differentiation means.

These pre-orders are a promising start, but it is small compared to the enthusiasm at the time of Concorde: 10 years before its entry in service, about 15 airlines had already placed orders or options (most of them were cancelled between 1972 and 1973 due to the oil crisis).

3. Factors which prevented Concorde from a commercial success are still present to date, but one of the major technological hurdles is about to be overcome

However, looking at the Concorde’s experience, any future supersonic aircraft project will face several important constraints, in order to reach commercial success. The main difficulties will be: 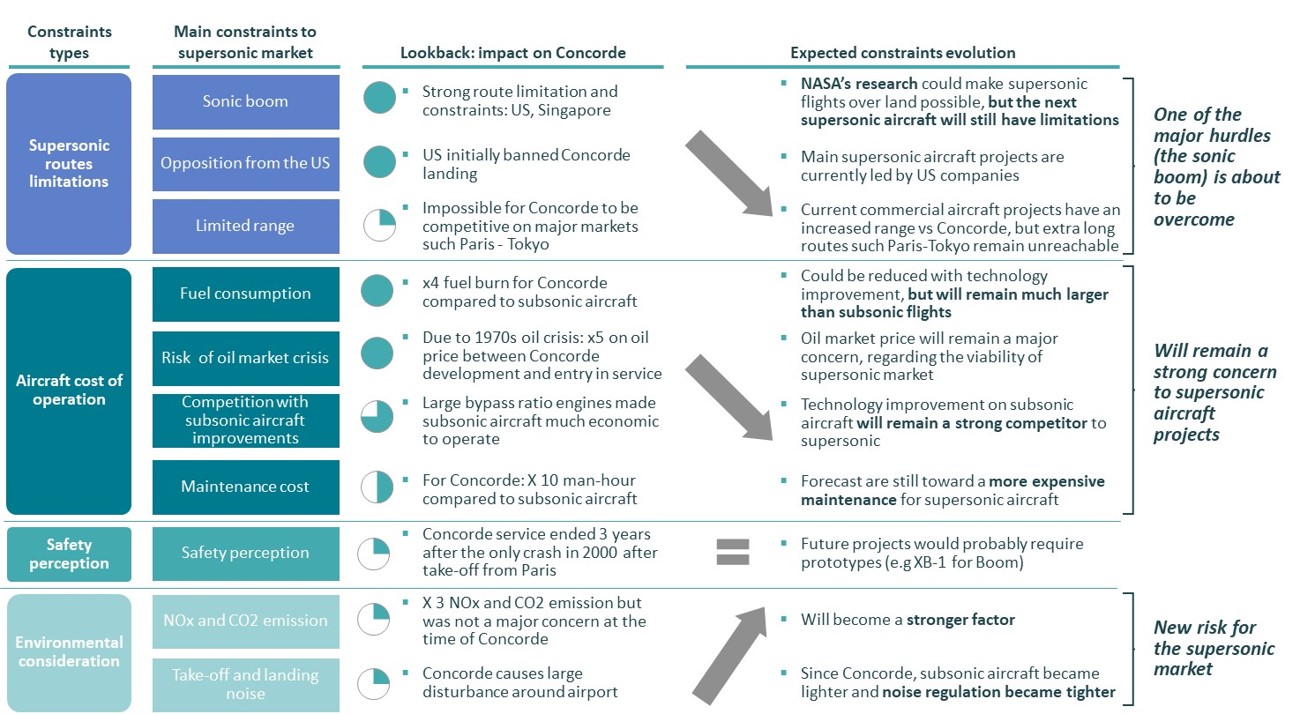 When flying supersonic, an aircraft creates a sonic boom that can be very noisy on the ground, even if the aircraft is flying at high altitude.

It was one of the major reasons which prevent Concorde from reaching commercial success:

Noise created during take-off and landing is also a challenge

Concorde In this frame, some countries are talking about special taxes on aircraft fuel. In addition, “Flight-shaming” is becoming more popular: this new trend aims at limiting companies’ use of air travel and reduce their carbon print, through the use of high-quality video conferencing systems for example.

Despite these concerns for emissions, air traffic is continuously growing including business travels, and it is expected to continue to grow substantially in the next 15 years.

In addition, current subsonic aircraft design is based on an architecture defined several decades ago when CO2 emissions was not as central as today. Now OEMs and OAMs are trying to optimize current design to reduce emissions. For supersonic aircraft we can expect to be in a more favorable situation, as this constraint is taken into account from the early stage of development. For instance:

The demand for supersonic flights is likely to be much more important than for Concorde, given the increase in both air traffic and the number of high net worth individuals

As for Concorde, future supersonic aircraft will have larger operational costs than subsonic aircraft. However current market environment is much more favourable to reach a commercial success. Since Concorde was retired in 2003:

From a technological and market perspective, the business jet segment is more likely to grow first

Afterwards, commercial supersonic flight is likely to become a strong segment within the business class market

The manufacturers strategy is to design a supersonic aircraft which gives airlines the option to charge the same fare as business class. If they manage to do so, supersonic flight is likely to become an important segment within business class market. Market research shows that corporate travellers value speed over in-flight service (e.g. comfort, connectivity, …), as opposed to leisure travellers. Depending on how the demand evolves, airlines could later be able to charge a premium for supersonic flights.

Since Concorde, the diversity of the major routes is more favourable to the development of supersonic flights across oceans: flights between Asia and U.S., or flights through Middle East hubs were less developed when Concorde flew. Now, some countries have a strategic geographical position to offer supersonic flights across oceans. Thus, they have the opportunity to develop this market, without waiting for further R&D. As an example, Japan Airlines placed 20 pre-orders with Boom.

With prohibitions on supersonic flights over land, players estimate that supersonic airplanes could address up to 500 routes, which corresponds to a market for 1 000 to 2 000 aircraft according to Boom.

The X-59 is a large-scale supersonic experimental aircraft with technology that reduces the loudness of a sonic boom. Flight tests are planned to begin in April 2021. Flight tests above US cities are planned between 2023 and 2026, in order to assess community responses to supersonic travel. Based on these flight test campaign results, the target is that ICAO defines the noise regulation for supersonic aircraft in 2028.

Depending on the manufacturers’ design timelines, the first aircraft allowed to fly supersonic over land with a design based on NASA’s results could enter into service in the early 2030s.

The number of viable routes and aircraft could be significantly increased if NASA’s on-going mission is successful. Supersonic flights would no longer be limited to routes across oceans. Thus, supersonic commercial aircraft and business jets could address:

Enabling supersonic flights over land could add several hundreds of potential routes (1300 additional potential routes according to Exosonic). Many of them would not be economically viable, but it brings a potential for a much larger number of commercial supersonic aircraft on the market.

Air traffic will continue to grow at a fast rate. In passenger-kilometers, it is already more than twice the traffic in 2003 and it is expected to double in the next 15 years.

Supersonic aircraft under development should be much less fuel consuming than Concorde but should remain more expensive to operate than current aircraft.

In the future, continued investments to keep on reducing operating costs and continued air traffic growth should contribute to develop the supersonic segment further. 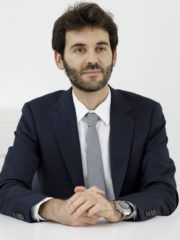 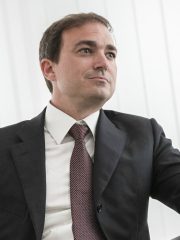