Gas pricing mechanisms have undergone profound changes during the last decade in Northwest Europe; prices are no longer based on the final users’ gas value but rather on the wholesale gas markets which reflect the supply/demand dynamics.

Gas shippers used to book their cross-border capacity on a long-term basis, but the drop in European gas demand following the 2008 economic crisis has left them with significant spare capacities. These over-bookings have been valued as sunk costs leading to low price spreads between the different hubs and a convergent level of wholesale prices across Northwest Europe.

Gas shippers are adapting their booking strategy relying more and more on short-term cross-border capacity in order to minimize their exposure to long-term commitments. This is likely to open significant spreads between the different hubs leading to a fragmented wholesale Northwest European market.

The various players along the gas value chain would be impacted by such a development. Midstreamers would be the first to benefit from increased price spreads as they would be able to recover the costs they have engaged for cross-border capacity bookings, whereas final users would face price increases.

A fragmented wholesale European market would also result in significant disparities between the gas prices paid by end-users in different countries. Such an evolution would strongly challenge the fundamentals of the current European Gas Target Model.

1. The development of gas wholesale markets in Northwest Europe has shifted the pricing mechanisms from the final user value to hub-related prices

Gas pricing mechanisms have undergone profound changes during the last decade; the development of wholesale markets favored gas-to-gas competition and prices are no longer based on the final users’ gas value (oil-indexation) but rather on the supply/demand balance on wholesale markets (gas hub-indexation). In Northwest Europe, the percentage of hub-indexed gas increased from less than ~30% of the total supplied volume in 2005 to more than ~90% in 2017.

Despite this radical change, European gas wholesale markets do not enable the trading of large volumes, even for the most mature and liquid of them; the price at which a seller is willing to sell and the price at which a buyer is willing to buy are separated by a “bid/ask spread”, which increases with the volume to be exchanged, making it unreasonable to deal with important volumes.

Therefore, the long and mid-term bilateral contracts remain the reference for gas supply when dealing with large volumes, with pricing mechanism changed from oil-linkage to gas hub-indexation. This kind of contract replicates the liquid wholesale market price and avoids unreasonable transaction costs. It also allows risk sharing between the two counterparts as the producer secures an outlet for its gas production but remains exposed to the price risk while the buyer runs the volume risk but ensures a price which reflects market dynamics.

Since the development of the wholesale gas markets in Northwest Europe, the hub price levels have been very correlated. The registered spreads between hubs have been very low compared to the regulated transmission tariffs to ship natural gas from one market to another. For instance, while yearly transmission tariffs to ship gas from the Netherlands to France reached ~0.8 €/MWh in 2017, PEG North was only ~0.2 €/MWh higher than TTF. 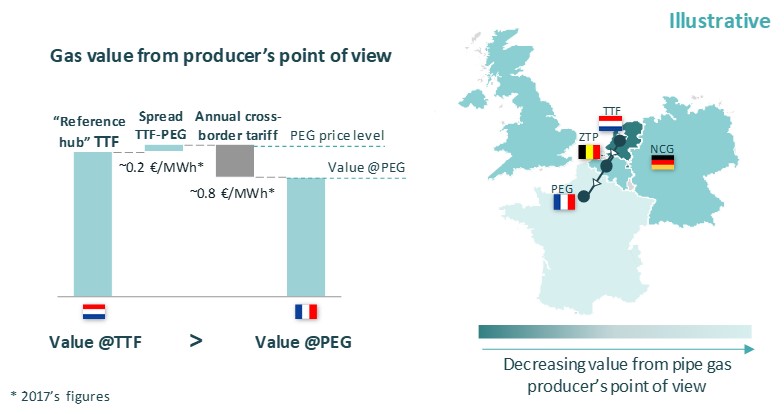 Therefore, from a producer’s point of view, the gas value decreases when it is transported away from the “reference hub” (i.e. TTF) as illustrated in Exhibit 1.

This phenomenon can mainly be explained by the decline in European gas demand due to the 2008 economic crisis combined with energy efficiency measures. This reduced consumption has left gas shippers with spare cross-border transmission capacity that they had booked well in advance on a long-term basis, in most cases.

The transportation tariffs at interconnections being valued as sunk costs by market players, gas has been shipped from one market to another with marginal costs near zero. As a result, most of wholesale gas market prices in Northwest Europe (e.g. TTF, ZTP, PEG, NCG, GASPOOL) have been strongly convergent.

The different players of the gas value chain have been impacted: 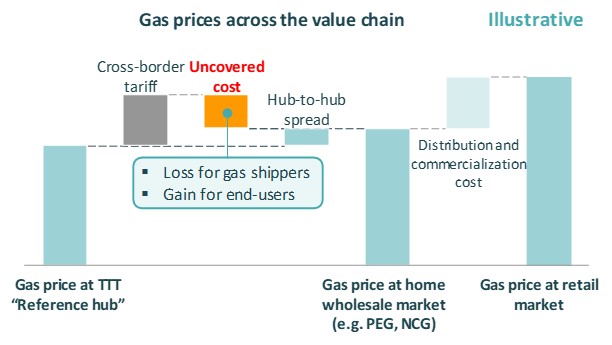 3. This situation could be short-lived since a shift in the shippers’ capacity booking strategy may result in a widening spread between hubs

In the few coming years, several long-term transmission capacity bookings will expire. Market players and notably midstreamers are likely to rely quite exclusively on shorter term bookings, including quarterly, monthly and daily capacities. Such short-term focus would allow them to minimize their risks and avoid incurring potential further losses.

Such a shift in shippers’ booking strategy may have significant impact on the European gas markets; the transmission tariffs would not be considered as sunk costs anymore. Thus, hub-to-hub spreads would increase and converge towards the marginal cost of cross-border capacity which are likely to be set by a basket of short-term tariffs (see Exhibit 3).

Such an evolution may result in a fragmented European wholesale market with substantial price gaps between the different hubs. The more distant a market would be from the “reference hub”, the more this market would be valued from a producer’s point of view.

Exhibit 4: Gas value from producer’s point of view for a fragmented market 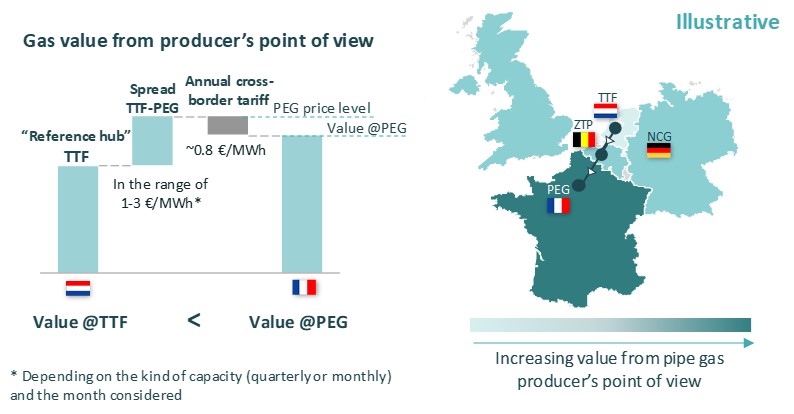 Therefore, from a producer’s point of view, gas would increase in value when marketed away from the “reference hub” as illustrated in Exhibit 4. For instance, the spread between PEG and TTF may reach ~2 €/MWh or more in case it would converge towards monthly tariffs.

However, the impact of such a situation would be mitigated if the global LNG market shifts into strongly oversupplied conditions in the short/medium term. Up to now, the Asian demand has been very robust in absorbing the new LNG volumes hitting the market. However, should the Asian LNG appetite falter, extra volumes especially from the US might end up in Europe as it is a structurally importing liquid market with much available regasification capacity.

In case substantial US LNG quantities started to flow from the Atlantic basin to the European markets, this may reduce pipeline flows, thus lowering the use of interconnection capacities between some of the Northwest European countries. As a result, the marginal cost of transmission capacities may remain at a low level curbing the gap which is expected to open between hubs.

4. A fragmented European wholesale market would have a substantial impact on the various players in the gas value chain

Compared to the current situation where the prices of Northwest European hubs are convergent, a fragmented wholesale gas market would have a substantial impact on the various players of the gas value chain:

Therefore, when dealing with a gas contract negotiation/renegotiation, more scrutiny would have to be put on the hub-to-hub spreads as their levels would impact both sellers and buyers.

Exhibit 5: Impacts of the hub-to-hub spreads’ levels on the different players of the gas value chain

The European Gas Target Model has been developed with the objective of creating an integrated European gas market. It aims at increasing the price convergence in Europe through the emergence of well-functioning, transparent and liquid wholesale markets.

However, the fundamentals of this model would be challenged if significant spreads appear between the hubs; depending on their locations, the European final users would face different price levels. For instance, French industrial and residential consumers would face higher gas prices than their Belgian and Dutch peers therefore undermining the objective of “convergent and competitive gas prices for all European consumers” supported by the GTM.

The retailers would not be incentivized to buy gas from their home wholesale markets anymore; they may prefer providing their needs directly from the producers as there would be some margin to negotiate more competitive prices.

The midstreamers themselves would rely on wholesale markets to a lesser extent, as it would become more competitive to book cross-border capacity and ship gas from one hub to another one. Therefore, the various players may be tempted to bypass the local wholesale markets therefore reducing their liquidity.

The expected increase of the price spreads between hubs can make gas less competitive favoring the switch from gas to other energy sources. This would result in the potential decrease in demand harming the whole gas industry, including players which may appear to be advantaged from a fragmented wholesale market such as producers, midstreamers and TSO.

Exhibit 6: Impacts of the hub-to-hub spreads’ levels on the different players of the gas value chain

These challenges would stimulate national regulatory authorities which are responsible for setting the cross-border tariffs. They may decide to reduce the short-term transmission tariffs to minimize the market spreads and enhance price convergence across Northwest Europe. However, in this case, the whole framework of the European gas market would need to be redesigned. 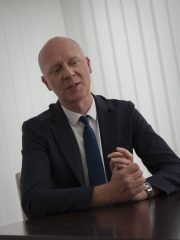 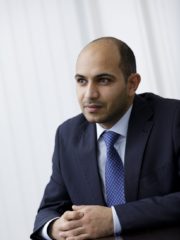